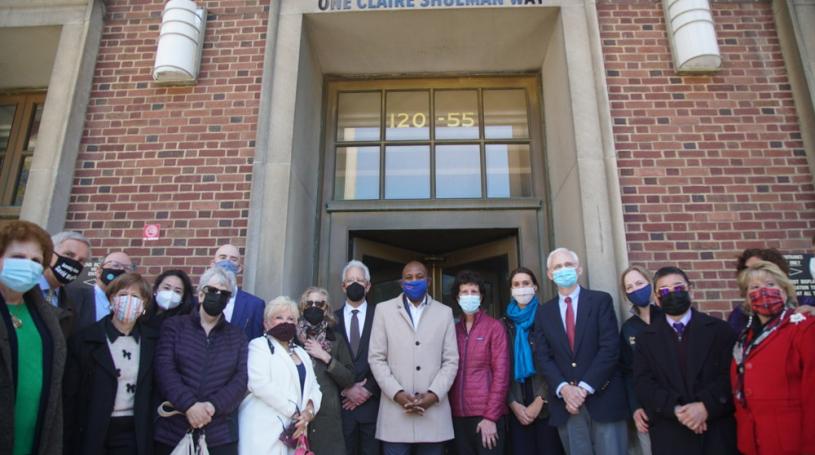 When Claire Shulman passed away last August at the age of 94, Queens lost one of its greatest advocates. However, the legacy of the borough’s trailblazing first female borough president continues to live on and inspire.

This past Monday, Borough President Donovan Richards presided over a ceremony unveiling “One Claire Shulman Way” as the vanity address of Borough Hall.

“Claire Shulman was a larger-than-life figure who consistently defied expectations with her uncanny ability to get things done for the people of Queens,” said Richards. “Her death last year was a huge loss to all of us who relied on her friendship and counsel, but we keep her legacy and memory alive by permanently and prominently affixing her name to Queens Borough Hall.

“From now on, everyone who visits the people’s house will see the name of Claire Shulman and reflect on the great work she did to build a better Queens,” he added.

Shulman was one of the first people to get behind Richards’ campaign for borough president.

“Claire Shulman was my unofficial campaign manager,” Richards said. “I can’t believe she supported me.”

Shulman served as Borough President from 1986 until 2002, and played a role in a wide range of issues.

Her accomplishments included the rezoning of dozens of neighborhoods to curb overdevelopment, expanding the borough’s infrastructure, and increasing funding to senior citizen centers, cultural programs and libraries.