Indoor Dining To Close In NYC On Monday, Cuomo Says 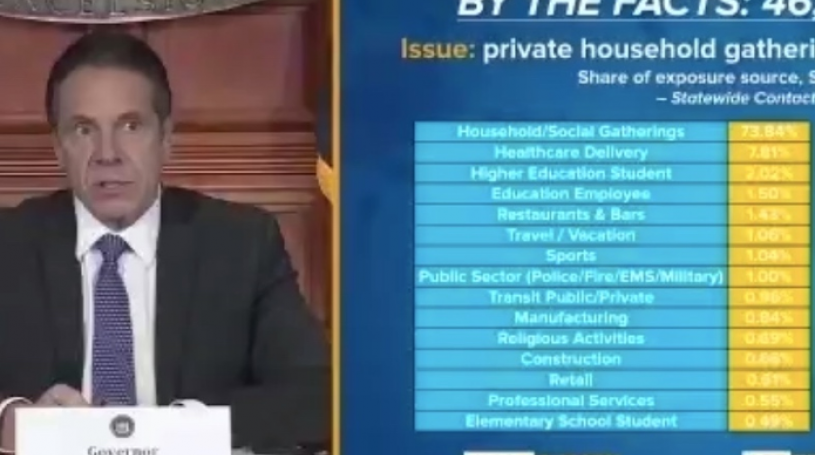 The governor said Friday that restaurants and bars will be ordered to close their doors to indoor diners starting Monday given an increasing coronavirus hospitalization rate in the city. Outdoor dining, delivery and takeout will still be allowed.

Cuomo had warned earlier this week that indoor dining might face a shut down if the hospitalization rate didn't stabilize. The decision comes after new guidance on indoor dining from the Centers for Disease Control and Prevention last week.

"In New York City, you put the CDC caution on indoor dinging together with the rate of transmission, the density and the crowding — that is a bad situation," Cuomo said. "Hospitalizations have continued to increase in New York City."

"Once that number is over 1, you're in a problematic state," Cuomo said.

There have been between 144 and 205 new coronavirus hospitalizations in New York City each day this week, according to data from Mayor Bill de Blasio.

The announcement came despite data Cuomo released Friday that shows that only 1.4 percent of exposure to coronavirus in New York between September and December comes from the state's restaurant and bars.

The largest source of exposure, according to the state's tracing experts, is still social and household gatherings, which represent 74 percent of the spread.

When asked about the potential harm to the struggling restaurant industry, Cuomo pointed to the expansion of outdoor dining and takeout. He noted that city restaurants have only been allowed 25 percent capacity on indoor dining since it reopened in late September.

"Yes, they'll be economic hardship, but we have compensated in other ways," Cuomo said, adding that he has pushed for federal relief for restaurants and bars. "...We're asking everyone to hold on. An end is in sight and we have to get there."

New York City will be the only part of the state that will scale back on indoor dining, Cuomo said. Restrictions for other parts of the state, and the possibility of new lockdown zones, will be announced on Monday after the state analyzes weekend data, he added.